My party of Veterans thoroughly enjoyed the InterOpera evening. For some it was their first experience of 'live' opera.  For all it was a very moving experience. Even our old boys had tears running down their faces in some parts of the programme.
I am extremely grateful that we were allowed to take part, and we will remember it for the rest of our lives.

In November 2015, popular international stars, Penelope Randall-Davis and Roderick Earle, were joined by two exceptional discoveries: Laura Wolk-Lewanowicz the British/Australian soprano and British-born Thomas Elwin alongside Soloists and Voices of Rocket Opera Ensemble in this all-new programme set to thrill and delight our audience.

North East Brass Ensemble also joined the line up for the very first time and InterOpera's new chorus made their concert debut in an all-new programme set to thrill and delight the audience. 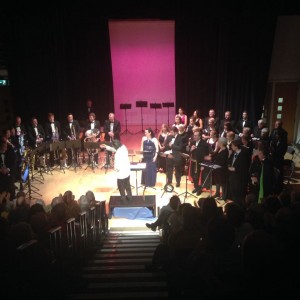 The fast-paced programme romped through the infectious fun of Rossini's Overture, The Italian Girl in Algiers, the gossipy Servants' chorus from Donizetti's Don Pasquale and the dramatic beauty of the sextet from Lucia di Lammermoor by Donizetti.

The audience were asked to brace themselves for the intense drama of Verdi's Masked Ball as the intrigue and excitement of the final Act was unmasked in a totally uncut transcription for the amazing North East Brass Ensemble and the magnificent cast.

Listen to some excerpts from the programme: